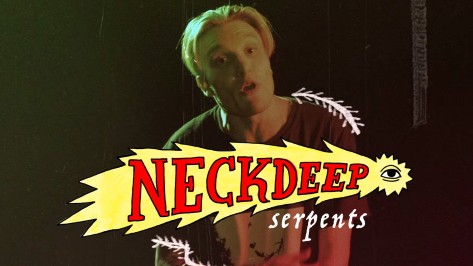 The epic song was originally part the 2015 Life’s Not Out To Get You album  and has recently been released as a EP that includes Blink 182’s Mark Hoppus remixing both Serpents and Can’t Kick up the Roots along with their originals.

In a recent interview Ben talked about the inspirations he had for the single and said: ‘Serpents is a little bit different and definitely a darker vibe I guess you could say.

‘Originally the bones of the song were given to us by Tom Denney (former A Day To Remember guitarist) – he had this idea just kind of sitting round that he hadn’t used and gave it to us.

‘We had to play around with the structure a little bit, I remember the structure being kind of difficult at first but yeah we kind of decided straight away that should try and make it full of imagery and all that sort of stuff.’

It is no coincidence that Tom Denney was involved with the album as A Day To Remember’s Jeremy McKinnon produced and helped wrote the songs as well as producer Andrew Wade.

The welsh pop punk star continued to talk about how the lyrics came about and what inspired the band and said: ‘Lyrically I guess it was inspired by a video game, me and Fil (Thorpe-Evans, bass player) played a game called PT Demo which was a demo for the new Silent Hill game.

‘We just heard it was super scary so we decided to put our nappies on and give it a go.

‘The whole game is about this women and she’s obviously dead and you have to find who’s killed her and what happened to her and all that sort of stuff and there is a load of creepy imagery in there.

‘The first lyric of the song or at least the first verse ‘A dark face in a corridor
Deceptively beautiful, She’s watching you’ was really inspired by the video game and it kind of just rolled on from there.

‘I took some of my own personal experiences and yeah tried to write a song that sounded like it should be set in a haunted house.’

All three bands will tour around the UK from April 16 where they will be heading to Southampton’s Guildhall.

A further three dates in Newcastle, Leeds and WSTR’s home city Liverpool will then take place.

Ben mentioned these bands and one more when he was asked if there is any new music that he’s been jamming too, he said: ‘So new music I would definitely recommend would be Creeper, WSTR and another band I have been listening to a lot lately is a band called Let it Happen – they’re from the states.

‘If were to recommend any three bands it would be those guys, that’s all the new music I’ve been listening to.

‘Other than I listen to the same music I been listening to in the past 10 years – not much has changed there.

That music being fellow pop punk band  Blink 182 and the Neck Deep front man continued to talk about how they influenced them – he said: ‘We were massively inspired by Blink 182, I think if anything they’re probably at least mine, probably Fil’s and maybe Sam’s (Bowden, guitarist) too.

‘Probably our biggest influences just generally musically, you know they’re the band that really did define music for me.

‘When I was a kid listening to Blink (182) and I don’t know it just seemed like they didn’t really care about being immature but at the same side still a little bit of a serious side to them to an 8 year old me that kind of just appealed to me.

‘Music to that kind of era generally like Sum 41, Good Charlotte and Green Day, they were some bands that I really enjoyed growing up.

‘My brother was a huge skate punk, when I was a kid I just remember him walking around with green hair just skating all the time constantly listening to his favourite band Bad Religion but he was the one that showed me (Green Day’s) Dookie for the first time and I remember that vividly.

‘I think I was just brought up well and I just spent my days sat in front of the TV and just flicking through the music files and just trying to find new music I can jam out to.’

You can watch Neck Deep’s acoustic cover of Fall Out Boy’s Grand Theft Autumn taken from a fan’s point of view below.

Bringing you the latest rock news 24/7